Milestone Achievement Marked by Commitment to Family and Service

When Larry Treleven joined Sprague Pest Solutions on April 1, 1971 as a service technician it wasn’t his first rodeo in the pest management industry. Treleven had tagged along with his dad, Bob, as a child and received an up close and personal look at an industry that became a lifelong endeavor. 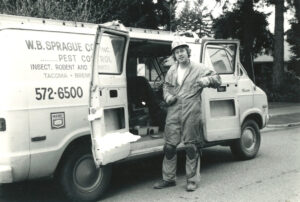 Larry Treleven early in his career protecting a business from pests.

The oldest of 11 children, Treleven has enjoyed a career that has seen Sprague grow from a single office in Tacoma to service centers in seven states across the Western U.S. That growth, however, has not come at the expense of his commitment to successfully bring the next generation into the family business ensuring the company stays true to its mission.

Treleven and his wife, Jane’s, three children, Ross, Paul and Angela, are actively involved in the business as members of the fourth generation of Trelevens to lead the company.

“We are not in the pest control business, we are in the people business,” said Treleven. “Being able to spend 50 years helping provide safer food and healthier places to live and work, and do so next to family and an outstanding team has been very rewarding.”

Treleven maintains an active role representing Sprague on numerous association and non-profit boards and committees. One of his most important undertakings is serving as a NPMA State Policy Affairs Representative advocating on behalf of the industry with state legislatures and regulatory agencies in multiple western states.

“Larry has always wanted one thing for Sprague Pest Solutions and the organizations he’s been involved with: success for the organizations and success for the people he works with,’ said Alfie Treleven, CEO of Sprague.  “Larry has been a great business partner and consummate team player. He has helped steward the next generation to successfully carry on the traditions of being in business together while supporting needs of the larger communities served. Larry truly lives service above self.” 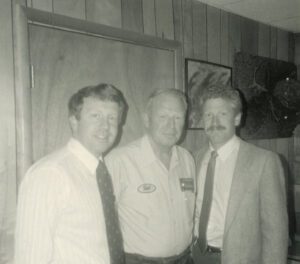 Larry Treleven (left) with his dad, Bob, and brother Alfie.

Son Ross, who was named Sprague president in October 2020, said his dad’s genuine care for people has served as an inspiration for employees and industry peers alike.

“50 years is a milestone achievement,” said Ross. “Dad loves to describe how the lumber industry harvests trees and then replants the trees for 20-to-50-year horizons. At Sprague we like to think in generations and a lot of that mindset comes from his ability to see how things change over time and why looking ahead is always so important.”

Back to News
Close