Scorpions may have a tough and scary exterior with their pronounced curved stinger, but they are more beneficial than is often realized.  Scorpions themselves are carnivores and hunt the same insects that pose an annoyance or danger to humans.  Their diet primarily consists of flies, beetles, ants, earwigs, moths, and other night fliers.  As a result, we advocate for a prevention methodology, rather than elimination. 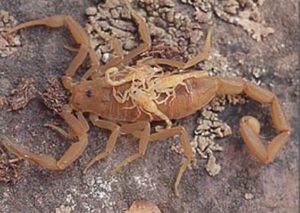 Scorpions are a desert arthropods and some prefer to build burrows in a sandy soil type.  They are commonly found in Southern California, Nevada, Arizona, and New Mexico.  They are singular hunters and do not travel in packs.  If one scorpion is found it is highly unlikely that more are around.  In contradiction to most other arthropods, scorpions are born alive and nurtured by their mother until their tough, outer cuticle fully develops.

Sprague is your partner in preventing scorpions from entering your facility.

Scorpions are nocturnal hunters and they come in for water.

Prevent intrusions by eliminating cracks and holes that they could use to penetrate a building. Some species like a bark scorpion, can climb walls so maintain door sweeps at thresholds to prevent access
2

Avoid clutter, disturbing wood piles, blindly reaching into boxes, walking barefoot at night, or other activities that could disturb a scorpion burrow.

Shake out loose clothing, empty gloves, and shoes to disturb any harboring scorpions.

Many people fear the sting of a scorpion, but they only sting out of defense if they feel that they are threatened by a predator, they will not seek out humans.  A threatened scorpion will use their venom as a last option.  Their venom is very precious to them, because once it is used, they are vulnerable to attacks from other predators until their venom re-generates in a few weeks’ time.

Many report that the sting often feels like a sting from a bee or an ant bite.  A sting is generally not life threatening, but those who are young, old, or immune compromised should be cautious around scorpions.  Most people report minimal discomfort and due to advances in medical technology, most stings are easily treated.

What To Do If Stung?

If you are stung, try to capture the scorpion to confirm species, and go to a doctor if you experience adverse medical outcomes. 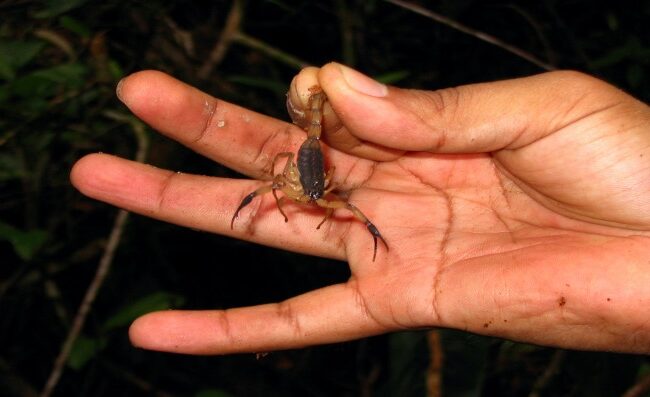 The primary defense to scorpions is to remove points of entry to a facility. Repairing cracks in foundation, holes in window screens, gaps around pipes or air condition lines. Some species like a bark scorpion, can climb walls so prevent entry at all levels is important.

Scorpions love to nest in areas with clutter, similar to spiders. Remove items stacked against a building to prevent scorpions from building nests.

Scorpions have a tough outer exterior called a cuticle that acts like an armor, making it very difficult for the pesticide to penetrate. To be effective, a pesticide would need to be sprayed directly on top of scorpion which can prove challenging as scorpions stay close to their nesting area and food source.  A result, the best method is prevention, not elimination.

A door sweep is one tool that can be used in removing entry points that a scorpion could use to seek out a water source.

One of the most effective ways to prevent scorpions around a structure is to change the color of exterior lighting.  Lights that are bring white attract flies, moths, and other flying insects common in the scorpion diet.  Changing lights to a yellow color, prevent the congregation of delicious food and are thus less attractive to scorpions.

Scorpions can be trapped using a stable surface and a container vessel like a jar or plastic container and released outside. We do not advocate for the use of sticky glue trap boards to capture scorpions as they do not allow them to detach and find a new burrow location.