The presence of stinging insects — yellowjackets, wasps and hornets – in and around commercial properties can be a real issue for property managers, employees, customers and guests.

While stinging insects are certainly a nuisance to guests enjoying a meal on a patio or to a member of your maintenance staff performing work on the exterior of your building, the threat of allergic reactions to being stung is very real.

A recent incident in Arizona resulted in the tragic death of one person and injuries to several others. In fact, more than 500,000 people go to the emergency room in the United States each year due to reactions from stings.

What is the key to successfully defusing a stinging insect problem on your commercial property?

Ashley Roden, B.C.E., technical manager with Sprague Pest Solutions, said it starts with correctly identifying the specie being a nuisance or posing the threat.

“Any commercial property is susceptible to stinging insects and making an accurate identification of the species present is the first step to coming up with a solution,” said Roden.

Roden said stinging insects, especially yellowjackets and bald-faced hornets are aggressive and become more so in late summer and early fall as their colonies grow in numbers and the need to feed the swelling ranks increases.

“Yellowjacket colonies, which can contain thousands of members, become more aggressive this time of year in the search of food, especially sugary foods and liquids,” said Roden. “The queen also dies in the fall and the colony becomes a little directionless which can contribute to their aggression as well.”

On the aggression scale, Roden said yellowjackets and bald-faced hornets top the list with solitary wasps and other bees being less aggressive and more focused on their roles as pollinators.

Stinging Insects By the Book

Yellowjackets typically have a yellow and black head/face and patterned abdomen. They are wasp-like in shape and workers 3/8 to 5/8 of an inch long. Yellowjackets are social insects that live in nests or colonies with up to 4,000 workers. They are most active in the late summer and early autumn when a colony is at its peak. 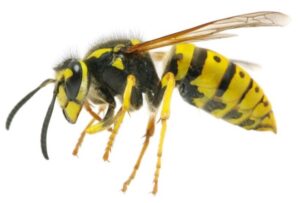 Yellowjackets are most active in the late summer and early autumn when a colony is at its peak.

There are many different species of yellowjackets, and they are usually found wherever humans are. They build paper carton nests out of chewed up cellulose and are usually found in the ground or in cavernous areas such as eaves and attics.

Paper wasps have a similar body shape to yellowjackets, but slimmer with a constricted waist, with six long legs and an almost triangular side view, as well as two wings and antennae. They are mostly brown with some yellow coloration. The characteristic that separates them from yellowjackets in the regions Sprague services is their orange tipped antennae.

Paper wasps have a similar body shape to yellowjackets, but slimmer with a constricted waist.

Paper wasps often build nests in eaves of buildings, so one of the main signs of an infestation is the physical sighting of the nest itself and nearby wasps moving around the nest.

The aggressive bald-faced hornets are related to the yellowjacket but have a very distinctive appearance with cream-colored and black markings. Queen bald-faced hornets are larger in size than their adult-worker counterparts. Their aerial nests are about the size of a basketball and are enclosed unlike the open cone structure of other stinging hornets and insects, like yellowjackets and paper wasps. 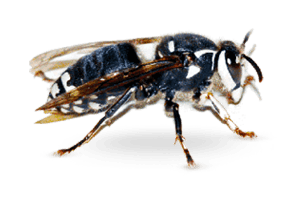 The aggressive bald-faced hornets are related to the yellowjacket but have a very distinctive appearance with cream-colored and black markings.

For more information on how Sprague Pest Solutions can assist you establish an effective stinging insect prevention or management program, call 855.805.0755.

Back to News
Close